From: the Northern Virginia Association of Realtors®

With interest rates rising and the inventory of available homes diminishing, the pace of home sales in Northern Virginia has slowed compared to last year, said Lorraine Arora, the 2018 Northern Virginia Association of Realtors® Chairman of the Board and Weichert, Realtors® Fairfax regional managing broker. However, home values are holding, with the median price 7.37 percent above February 2017, at $500,000, and homes are selling at an average of 97.7% of the original listing price.

“National inventory constraints continued to challenge Northern Virginia buyers in February,” said Rob Wittman, principal broker with Redfin in Falls Church. “Particularly noticeable is that the months of supply continue to fall – an indication that buyers are snatching up the available homes for sale faster than sellers can place their properties on the market. 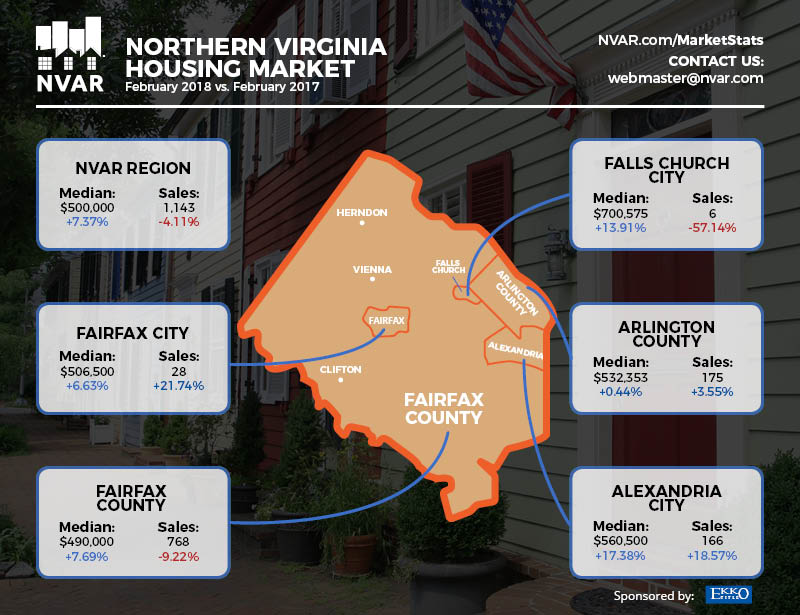 “Further highlighting the demand for homes is the shortened days on market and the more than 1 in 8 transactions that occur where the buyer uses cash to purchase the home. Stiff competition from other buyers highlights the need for creativity to find properties and prepare the most competitive offer,” Wittman said. “The spring market is just getting started. Prospective sellers can be confident that there are eager buyers in Northern Virginia,” Wittman added.

“There were 1,143 homes sold in our NVAR footprint in February, which is about 4 percent more than the 1,097 homes sold in January,” Arora said. “The Federal Reserve hinted that a rise in short-term interest rates may occur at its March meeting, based on a strong economic outlook. Even though interest rates are still at historic lows, such a move could continue to keep home sales in check.

“We also need to keep in mind that as we approach the April tax-filing deadline, prospective buyers and sellers may be considering how changes to federal income tax laws might affect their future housing decisions,” Arora added. “And that impact is still not clear to many people,” she said.

According to Ryan T. Conrad, NVAR CEO, “Northern Virginia continues to be a stable market for real estate. Although year-over-year numbers for February show a slowing of home sale activity in our local footprint, the numbers overall are positive when compared with a five-year February average.

The Northern Virginia Association of Realtors® reports on February 2018 home sales activity for Fairfax and Arlington counties, the cities of Alexandria, Fairfax and Falls Church and the towns of Vienna, Herndon and Clifton.