Of course, the problem with trying to define a “dad” is that they, like the kids they father, come in all shapes, sizes, and qualities! A lot of the time, a dad seems to mold himself into the shape needed by his children. Sternness is needed by some, while flexibility is needed elsewhere. Actually, some of each is needed by almost all, but more of one than the other is needed by some. 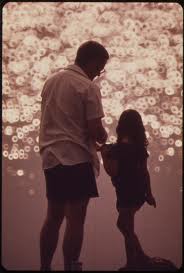 In some eras, a father was expected to be the silent, strong background figure that was invoked when things got rough. “Wait till your father gets home” is a cliché, precisely because that’s the attitude that prevailed for a long time. The use of that phrase has kept many kids quaking in their boots, and prevented many kids from making things worse for themselves by continuing unruly behavior. It got overplayed in movies and television, so it became more of a joke than anything.

Nowadays, the use of the phrase has a whole different connotation. It doesn’t conjure up images of a stern, frowning father with a kid turned over his knee. Many parents, dads as well as moms, tell kids to wait for the other parent to discuss options. Dads have a more hands-on role in the lives of their children, and that’s a good thing.

Dads are stepping up as role models for their children. They become baseball and soccer coaches, as well as scout leaders. Children are just as likely to ask Dad for help with studies as they are to ask Mom. Many recent studies have shown that this is important. The presence of the father, or at least a father figure in a child’s life, has much more influence than previously thought.

Naturally, this data is not the point to the kids. They just know that riding on Dad’s shoulders is a blast. They simply are having instructive fun when Dad is helping them with their science project, or coaching their team. Walking down the aisle on the arm of her papa doesn’t bring charts and statistics on successful fatherhood into the mind of a bride. It brings tears of joy to her eyes.

Dads have a way of extracting the best from their kids. This is done, not so much by preaching and pushing, but by giving good example and encouragement. With all this in mind, the Casey O’Neal Team wishes to extend to all the fathers, adoptive fathers, foster fathers, and father figures in the D.C. area a heartfelt HAPPY FATHER’S DAY!