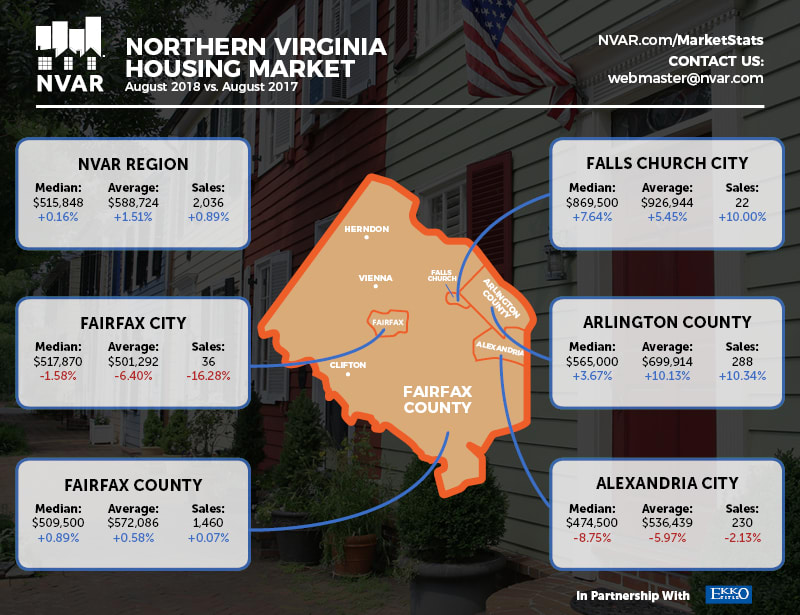 “For the short term, the limits to the state and local tax deductions (SALT) appear to be only a slight headwind to buyer confidence in our region,” said 2018 NVAR Chairman Lorraine Arora.

“We are showing slight increases in our average sold and median sold prices for August along with homes that are on the market an average of 34 days.”

She pointed out that the 2,036 home sales in August reflect a stable trendline in the local housing market with overall average equity gains.

Explained Bob Adamson, associate broker with McEnearney in Arlington, “The prospect of future rate increases has kept the velocity of home sales at a high level and the big drop in average days on market indicates that buyers feel a little more pressure to act quickly. New contracts are up about 7 percent and new pending contracts are down about 8 percent from August last year, which could be due to lower inventory or a seasonal drop in overall purchase activity,” he said.

“A house is usually the biggest investment most families make, and the process takes careful review,” Said NVAR CEO Ryan Conrad. “With the average sold price for a two-bedroom townhouse at $435,000, many young adults in our region have taken their time to move out of their parents’ homes and start their own households. The experience of obtaining a mortgage is a long process, so we know first-time buyers are slow to make the commitment. The good news is that when they do, their wealth building has a strong start.” Entry level price points continue to be lean in Northern Virginia, he pointed out.

The Northern Virginia Association of Realtors® reports on August 2018 home sales activity for Fairfax and Arlington counties, the cities of Alexandria, Fairfax and Falls Church and the towns of Vienna, Herndon and Clifton.